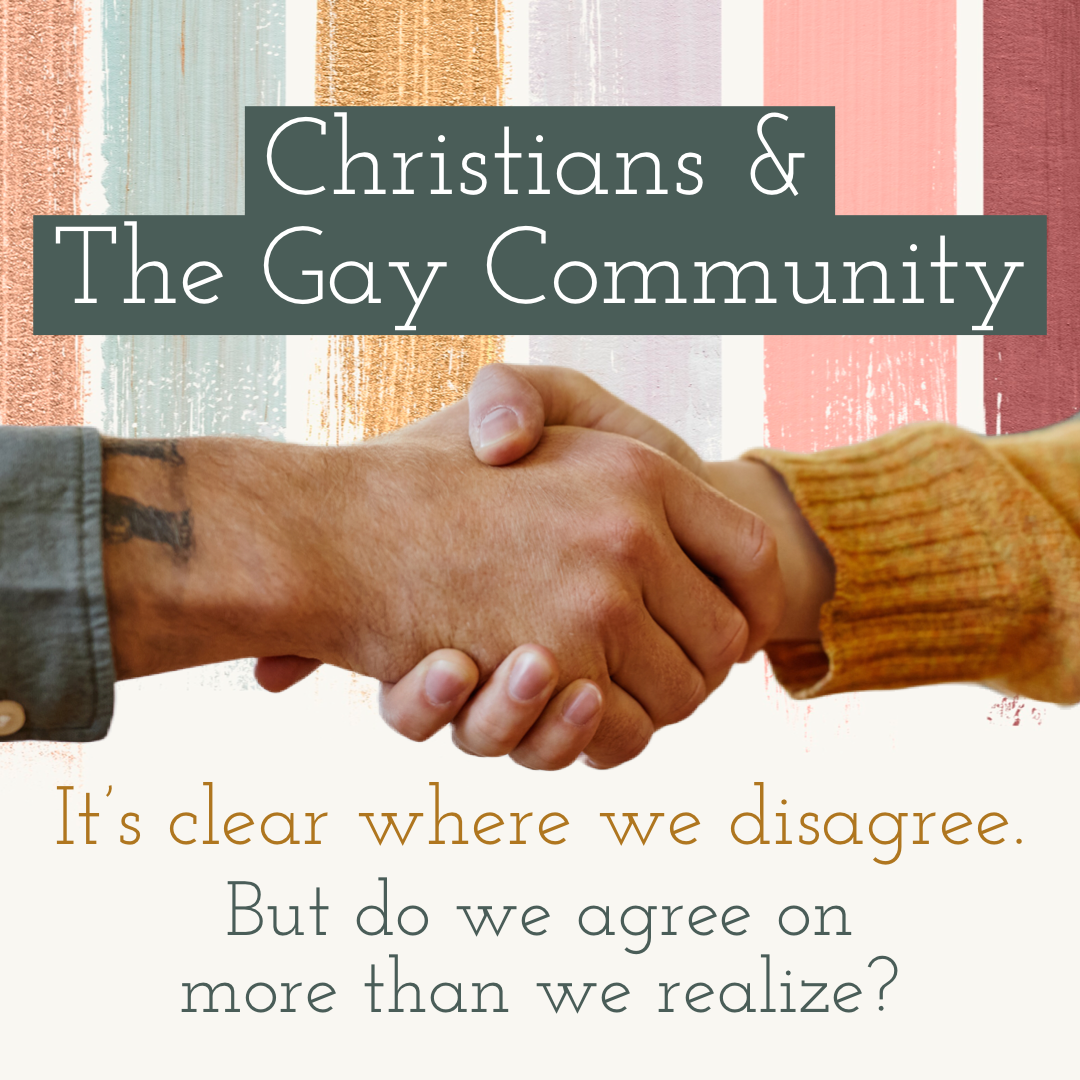 Where do we agree?

Ok. Here it is. The issue that has plagued me for the entirety of my adult life as a Christian: how to approach the issue of LGBTQ+ individuals as a believer.

Every June, when the Pride flags are a-flyin’ the message boards light up with the firm divide of whether or not Christians can support gay marriage.

I’m not here to dig my heels into my standpoint. That’s not what God asks of me. As Brian McLaren puts it, “you have to admit that Jesus didn’t say ‘they’ll know you are my disciples by your firm stance on divisive social issues” (13).

But I, and all Christians, also can’t shy away from continuing the conversation with LGBTQIA+ supporters.

No stranger to divisive issues, Martin Luther King Jr., in his famous Letter to Birmingham Jail, discusses the difficult topic of racial injustices in America and concludes “There is a type of constructive, nonviolent tension which is necessary for growth.”

I’m here to lean into the tension regarding those who are proponents of LGBTQIA+ rights and marriage and determine where in fact there is common ground between the two groups.

Holy Spirit, help me uncover even a mustard seed of hope that we can bridge this ever-growing gap of hate and misunderstanding.

Much of this blog post is informed by Andrew Marin’s book Love is An Orientation which will be linked at the end of the post.

STEP 1: LET US ACCEPT WHERE THE DISAGREEMENT CANNOT BE RECTIFIED

The main point of contention between Christians who support gay marriage and those who don’t is whether homosexual marriages are considered a sin in the eyes of the Lord.

Proponents of gay marriage who identify as Christian maintain that the laws against homosexual relations are among the antiquated parts of the Bible that no longer need to be observed along with covering one’s head or separating certain foods on the plate. In a letter to her son, openly gay blogger Glennon Doyle Melton confirms this standpoint:

Recently there was some talk in my Bible study about homosexuality being sinful. I quoted Mother Teresa and said, ‘When we judge people we have no time to love them.’I was immediately reprimanded for my blasphemy by a woman who reminded me of 1 Corinthians 6:9–10. But I was confused because this woman was speaking. In church. And she was also wearing a necklace. And I could see her hair, baby. She had no head covering. All of which are sooooo totally against the New Testament Bible Rules. And so I assumed that she had decided not to follow the parts of the Bible that limited her particular freedoms, but to hold fast to the parts that limit the freedoms of others.

“A Mountain I’m Willing to Die On”

Melton and others who identify as LGBTQIA+ Christians believe that Jesus would not condemn married homosexual couples who are not having sexual relations outside of that union.

Christians who oppose gay marriage assert that Jesus clearly states that marriage is a covenant between a man and woman and no consideration of context changes that statement.

They respond to the claim that the parts of the Bible that are considered antiquated and should be dismissed by asserting that there is a difference between moral, ceremonial, and civil laws.

Jonathan F. Bayers in his article “The Threefold Division of the Law” explains the following about these three categories of Biblical law:

He later explains why the moral laws of the Bible are still to be upheld unequivocally:

…the moral element in the law focused on the Ten Commandments is of permanent application, while the ceremonial and civil elements were for the duration of the Old Testament economy only (3).

Bayers refers to an anecdote to support his argument of the moral law: the Pharisees challenge Jesus over his disciples’ failure to wash their hands as an infraction directly opposed to the commands in Exodus 30:19.

Jesus side-stepped the issue, and turned instead to the fifth commandment. He evidently had different priorities in legal interpretation from the Pharisese. In other words, his concern was moral where theirs was ceremonial (14).

Traditional Christians maintain that sexual purity within the context of marriage is a moral law, not a civil or ceremonial law to be disregarded with the change of culture.

It is in the issue of sin in which complete agreement will never take place: one group claims it is not a sin and the other does. However, do we continue to spew hate in Instagram comment sections under the guise of defending our position which furthers the divide between LGBTQIA+ and traditional Christians? This would get us nowhere and it drives these individuals further from church.

Marin has a better solution: “I propose a new paradigm: it is possible to disagree and yet still peacefully listen, learn and dialogue so that something significant can happen for the kingdom.” (39). And if you get a chance to read his book, Marin demonstrates how he elevates the conversation with the gay community from vitriolic online comments to genuine listening and compassion.

And here, under the symbol of a holy handshake, let’s see where both factions have common ground to remind us that we are all children of God with a command to love one another.

COMMON GROUND: PEOPLE WITH HOMOSEXUAL DESIRES ARE STILL VERY MUCH LOVED BY GOD

We need to thwart the idea that homosexual relations are somehow a “special” or “worse” sin than the sins that you and I struggle with daily. The counter-argument given by traditional Christians is that the LGBTQIA+ individual is accepting a life of sin without repentance. I understand that, but I ask this: how is that different than a gossiper who repeatedly and consistently speaks ill of others for the entirety of her life?

We need to stop treating those who identify as homosexuals as something worse than the rest of the sinful congregation.

In Marin’s section on love, he reminds us that “love is being the first one to drop the stone because you know your life and sins are no less than any other” (110).

COMMON GROUND: HATE SHOULD NOT FACTOR INTO OUR ATTITUDES TOWARDS THOSE WHO DISAGREE WITH US

I feel absolutely sick when I hear stories about gay individuals committing suicide because they can’t reconcile their same-sex attraction with the church community and ultimately determine that they belong nowhere and are better off dead. If there’s one place that gay people should feel safe, it’s the church. You better believe that if Jesus were alive today, he would willingly share a meal with people who identify as gay.

Mark 2:16-17 reveals that Jesus accepted everyone in every state of sinfulness: “When the teachers of the law who were Pharisees saw him eating with the sinners and tax collectors, they asked his disciples: ‘Why does he eat with tax collectors and sinners?’ On hearing this, Jesus said to them, ‘It is not the healthy who need a doctor but the sick. I have not come to call the righteous, but sinners.’”

I will never forget what our late pastor, Dean Rutherford, used to say about sinners in the church; it has become my mantra when talking to those who are fearful to attend: “Church is not a hotel for saints. Church is a hospital for sinners.” Church is a body of people who fall victim to sin time and time again and need other people to love them as they work on turning from their sins.

In his article “How Christians Can Disagree in a Loving Way” Jonathan Merritt includes a testimony from a gay Christian and the response of her pastor.

I came out publicly when I was 17, and remember how horrible I felt leading up to the conversation I was going to have with my pastor, and ultimately my church. And because I live in a small town I knew I was coming out to my whole town at that point too. To my complete shock, the most memorable response I got actually came from my pastor. He said, ‘We are going to learn to overcome hate together. We aren’t going to hate each other. Then we’re going to help our congregation learn to not hate either.

“On LGTBQ Issues, How Can Christians Disagree in a Loving Way?”

Hate does not get us anywhere.

Love has the ability to drive out hate. Let us not forget.

Being attracted to the same sex does not automatically cover heterosexuals from sin.  Sin is very much still present in the heterosexual world.

The one unfortunate difference between LGBTQ+ who are “out” and heterosexual people who struggle from the heterosexual sins just listed– everyone can see and identify the LGBTQ+’s sexual choices far more than the latter group.

In church, you may be sitting next to a woman who struggles with pornography addicition or a man who is having an affair outside of his marriage. But because their sin is not readily apparent, they do not suffer the same fear of rejection from the church that LGBTQ+ people do.

But where is the very place that all of the above need to be? Church.

COMMON GROUND: HOMOSEXUAL ATTRACTION DOES NOT AUTOMATICALLY GO AWAY BECAUSE SOMEONE TURNS FROM THE LIFESTYLE

Perhaps the most ubiquitous modern example of a self-identified lesbian opposed to gay marriage is Jackie Hill Perry, Christian author and speaker, who renounced her same-sex relationships and is now married to Preston Perry with whom she has four children.

In the article, “Sexuality has Nothing to Do With Salvation” by Nicola Menzie, she reiterates Perry’s self-attested sexual identity: “[Perry] has previously explained that while she loves and enjoys her husband and considers herself ‘functionally heterosexual,’ she remains ‘very much attracted to women.’ […] But believing that God ‘makes us new people’ doesn’t mean Christians are then exempt from struggles and temptations.” Later in the article, Perry punctuates this ideal with the following statement

Yet I love God more than what I am tempted by.

Jackie Hill Perry in “Sexuality Has Nothing To Do With Salvation”

In 2022, both sides mainly agree that antiquated “forced conversion therapies” are not a successful way to bring LGBTQIA+ individuals to Christ.

COMMON GROUND: CHRISTIANS ARE NOT REQUIRED TO SAVE ANYONE WHICH INCLUDES LGBTQ+ PEOPLE

When Billy Graham was seen at a rally supporting Clinton in the middle of his sex scandal, a reporter asked him how he could support Clinton after everything he has done.  Graham responded in a beautiful succinct statement: “It is the Holy Spirit’s job to convict, God’s job to judge, and my job to love.”

So… How Do We Move Forward?

Common ground is a start, but how does it inform traditional Christians moving forward?

We don’t have to compromise our convictions to do any of the above things.

To bring this blog post full circle, I’ll nod to Martin Luther Jr. once again by using the closing statement form his famous letter to help me end my meditation on this subject:

Here is the link to Andrew Marin’s Love is An Orientation which (at the time of this post) is on sale for less than $5!

6 thoughts on “The Holy Handshake: LGBTQ+ Issues and Christians”