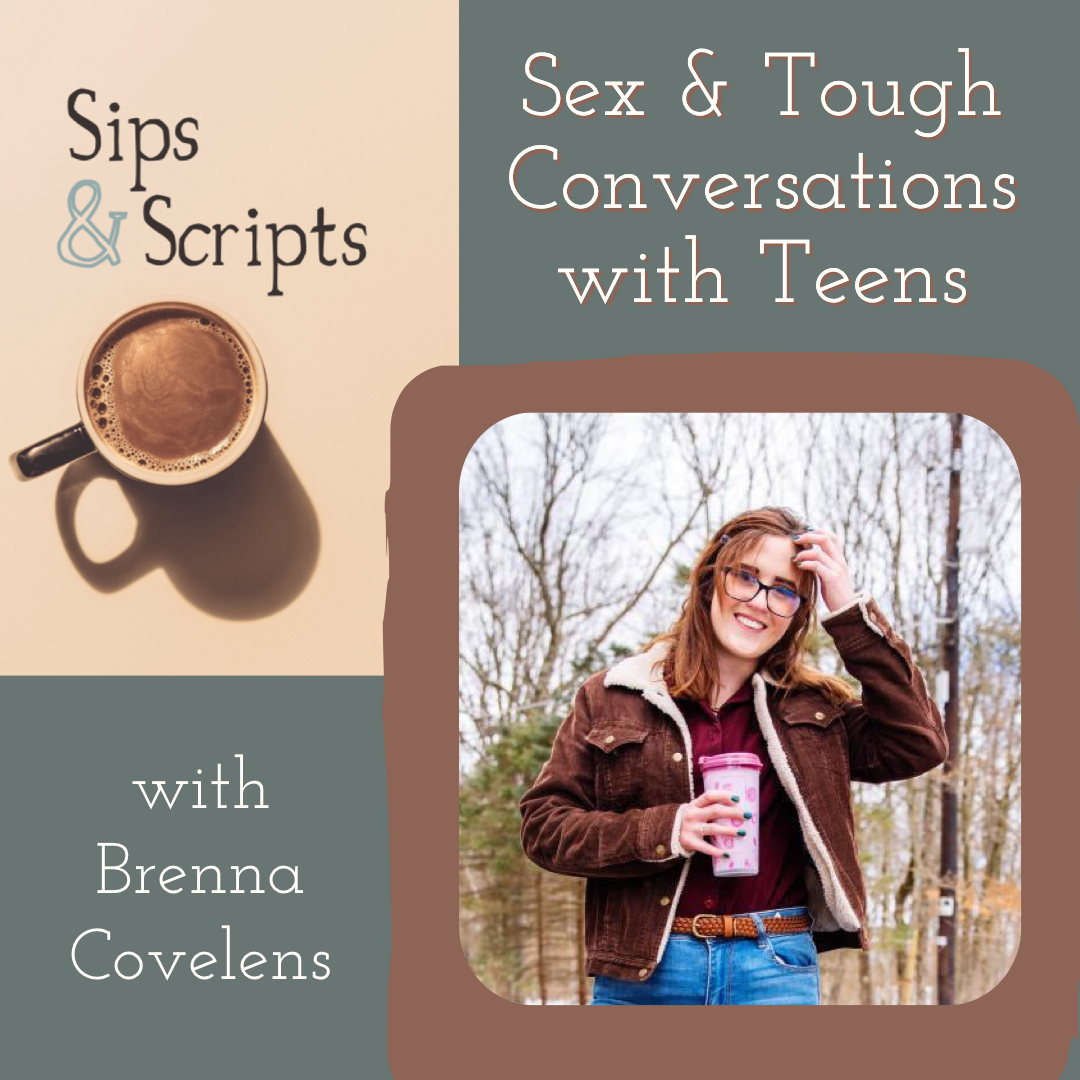 Her drink is a matcha blueberry latte.

Though the cross-country time difference made it tricky to schedule (and my swirling #momlife didn’t make that any easier), Brenna and I finally found a pocket of time to sit down in our respective states (Pennsylvania and California) and chat about something very near and dear to her heart: informing teens about sex.

Brenna found it easiest to tell her story chronologically so no event would be left out.

Every step of the way she would add a phrase like, “I wish I would have known” or “I was never taught about…” and she concludes with the idea that hard conversations can really help prepare our youth for issues of sex.

“In fourth grade, when my school had the first class on puberty and the developing body for girls, I was the only girl who was not able to attend. My mom pulled me out and I had to go watch a dinosaur movie with the boys.

My mom was well-meaning; she wanted to be the one to teach me about sex. But my mom underestimated just how early kids learn about sex from peers these days.

Before she got a chance to teach me anything, a classmate showed me her ‘sex bracelets’— meaning, she earned one for each different act of sex she had performed.

So though my mom had the best intentions, I still ended up learning about sex from school.

I love my mom and I understand her reasoning, but I wish she and I could have had honest conversations about sex at that age.”

BRENNA LEARNED A TRUTH ABOUT SEX THAT UPSET HER

“Years later, as a teen in high school, my mom and I were watching a show about a sexually active teenager.

I asked my mom point-blank if she waited for marriage to have sex.

What followed was a long, uncomfortable pause when a parent is trying to figure out how to respond.

She finally revealed that though she only had sex with my dad, they did not wait for marriage.

I was so upset that I ran to my room and slammed the door. She was telling me to do something that she didn’t do herself.

Of course, my mom’s rationale was that she didn’t want me to repeat her mistake. But by hiding the fact, I felt betrayed.

I wish she would have told me her story and then told me why she wanted something different for me. If she brought me in on the guilt that accompanied premarital sex, then I would have understood her decision so much better.”

BRENNA STILL DID NOT UNDERSTAND WHAT CONSTITUTED SEX

“Without any information, I went into relationships with boys with the understanding that only traditional intercourse was sex and everything else was fair game.

I had no concept of the idea of purity, because I never had discussions about it and how I should honor God with my sexual purity.”

“In my early twenties, I had a Christian boyfriend who intended to marry me. Our physical relationship progressed to the point of having sex. He asked me if I wanted to, and I said yes, and we did.

But what followed was a palpable guilt, like a fly buzzing around my ear—it never left me.”

We inevitably broke up because I was seven years younger and not as ready for marriage as he was, and I left that relationship feeling damaged.”

ONCE THE DAMAGE IS DONE…

“Once I felt like the damage could not be undone, I just leaned into sexuality.

I had a one-night-stand.

I was confronted with intense feelings of arousal that I had no idea how to navigate.

I had no tools or information at the ready for what to do with these powerful sexual urges.

I wish someone would have talked to me about temptation and the struggle of sexual desire— it is really powerful.

I felt entirely pinned down— Satan had his leverage on me. He filled my head with lies. He told me that I chose sex instead of God, and that it was too late. I lived with these condemning thoughts.

And strangely, once I found myself in victimhood, I just kind of stayed there.”

BUT STILL, THE HOLY SPIRIT PERSISTED

“In one of my final sexual relationships, I had a boyfriend who pressured me to have sex with him often.

I was hearing that fly buzz again— the Holy Spirit telling me not to do it— and I told him I was wanting to pull back on sex.

I asked him if he wanted to go to a Christian counselor with me. He refused.

And the conviction of the Holy Spirit just kept getting stronger to the point in which I couldn’t ignore it. The Holy Spirit would even send me the verse from 1 Corinthians 6 as I was having sex ‘flee from this! Flee from this!’ This issue with sex finally broke us up.”

AN ADVERSE RELATIONSHIP WITH SEX AND TIME TO SEEK HELP

“I wanted to never have sex ever again. I was traumatized. Was my ex right? Would every guy I meet need sex to be in a relationship with me?

My experience was not aligning with the famous verse on love being patient and kind (1 Corinthians 13).

I sought Christian counseling through my church, and I was starting to gain insight on sex and relationships.

I also found some incredibly helpful books on sex, and finally I was getting the information I wish I had received as a pre-teen.

“The second book that really helped me is Sex, Jesus, and the Conversations the Church Forgot by Mo Isom who discusses her own experience with purity and what she learned in her own sexual relationship with her husband.”

Finally feeling equipped with the information and spiritual guidance to accompany the Holy Spirit’s nudgings, Brenna wants others to avoid the mistakes she made.

“Parents, talk to your kids early. Earlier than you think you have to.

I know many parents think their kids don’t need to know about sex because they are certain their kids will wait for marriage. This is a noble, Godly goal and I hope the number of youth who make it to marriage increases.

But temptation will still occur even for those who are determined to wait.

Misinformation can still harm those who are determined to wait.

Teens need spiritual equipment on what to do if they are pressured or tempted to have sex.

Information is key no matter the intentions.”

“To the young people out there, I want to say: sex is not love. Sex outside of marriage can have so many damaging results and God is trying to protect you with his law.

Talk to your parents about your sexual feelings and experiences no matter how awkward it may be. Those conversations have power. Pray together.

When you enter a relationship, be honest and upfront at the beginning about what you expect and where the lines are drawn.

If you mess up, deal with it in the right way with repentance and counseling. Don’t pretend it didn’t happen or live in a state of victimhood.

Ask tough questions in church. If your church isn’t willing to talk about it, find a pastor who will.”

Brenna has just launched a podcast called “Beyond Just Christian” with an aim to help bring more candor and honesty to the world of Christianity. Here is the episode where she talks about her experiences with sex. You can also find her on Instagram.

Brenna is comforted by Paul’s first letter to the Corinthians.

“In 1 Corinthians 14 Paul writes, ‘Let love be your highest goal,’ though American culture might try to teach us to ‘Let sex be your highest goal.’ Sexual feelings are temporary and not long-lasting. Love is. If you replace love with sex, it will absolutely back-fire on you.”

Brenna left me with the a final verse that the Holy Spirit whispered to her in her darkest moments of temptation:

Run from sexual sin. No other sin clearly affects the body as much as this one does for sexual immorality is a sin against the body. Don’t you realize that your body is a temple that the Holy Spirit lives in and was given to you by God? For God bought you at a high price so you must honor God with your body.

Indeed we were purchased for a high price, dear friends. And one way to honor God is through our sexual purity— though that means different things for the unmarried versus the married— we all can choose to honor Him with our bodies.

9 thoughts on “Sips & Scripts: Christians, Talk to your Teens about Sex”