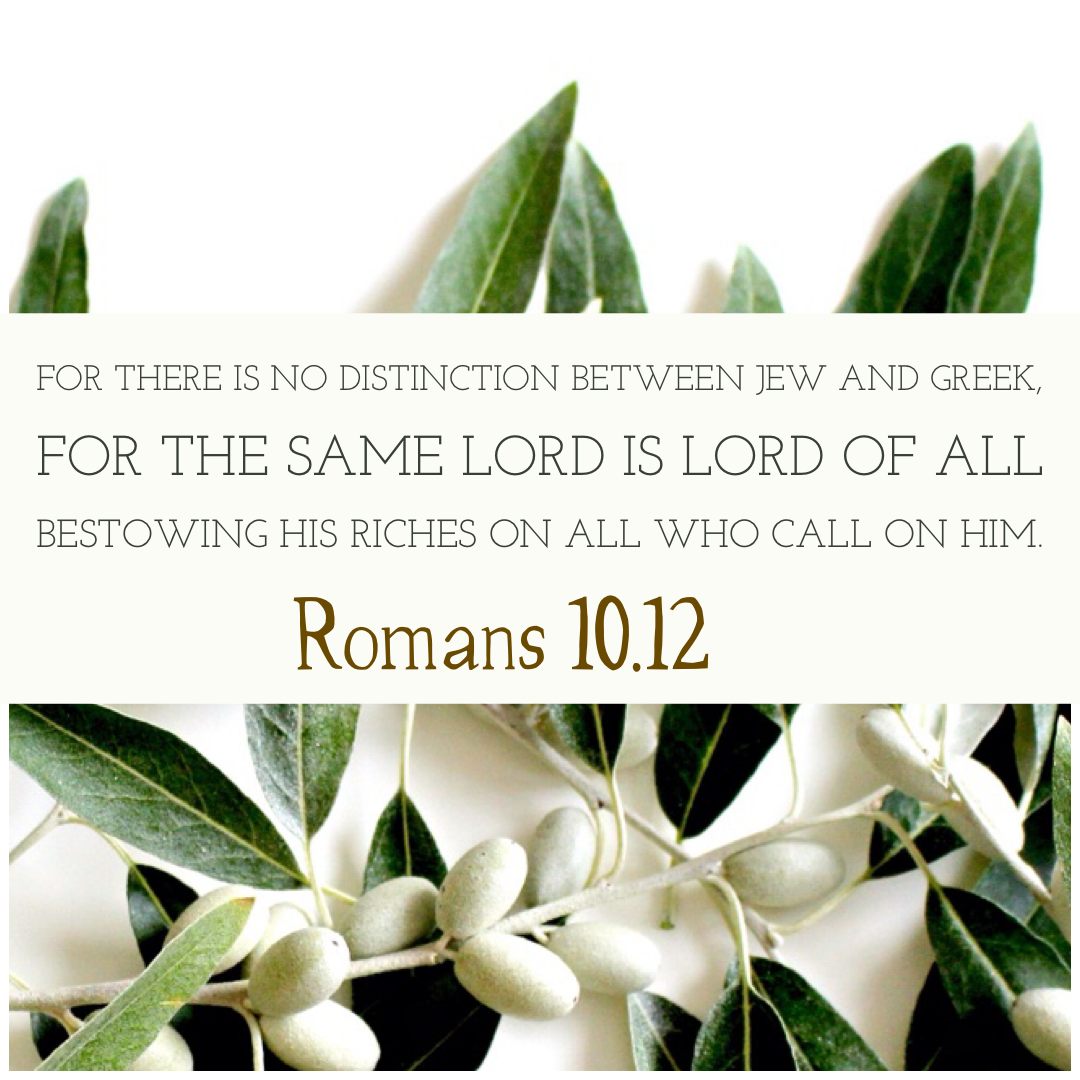 On my Bible-reading calendar, I slated Romans for June, not knowing that June 2020 would see a turmoil in America like we haven’t seen in ages.

Late May saw the death of George Floyd and so early June saw the subsequent uprising of protests against police brutality that morphed into a Black Lives Matter movement so forceful it was impossible to look away.

And so this month started with clenched fists that have slowly started to unclench: arson and looting have been overtaken by peaceful protests and conversations about how to fix what is wrong in our race relations.

Though the Civil Rights era granted important and necessary rights to Black citizens, the racism that enveloped the era was not magically erased as some would like to think. Sadly, racism and prejudice are still a part of our national fabric, and June 2020 feels a little bit like the fabric has been ripped to shreds.

So now it’s time to sit down at the loom and begin weaving again. But how to bring the threads together in a harmonious tapestry?

How can one person—a white person—help?

I started the month feeling stuck. I am a friend to many people of color and I also am the daughter-in-law of a former county sheriff. Was I supposed to have a side here? It sure seemed like people were jumping onto one side or the other.

But jumping onto a side is reinforcing a divide— exactly what our country wants to avoid.

Nevertheless, I recognized that we have lots of dysfunction in our race relations, and I want to help enact change. But where to start? And what can I—a White woman— do? What is my place in all of this?

Thankfully, I found the book Be the Bridge: Pursuing God’s Heart for Racial Reconciliation. I had been searching for a resource that wasn’t saturated in politics and partisanship, and Latasha Morrison delivers. Using God’s word as her foundation, Morrison outlines what kind of work can be done to create true racial reconciliation and unity between believers.

Though I typically love a hard-copy book, I couldn’t wait to get started, so I purchased the digital version and have been tearing through it on my tablet, nodding my head and highlighting sentences on just about every page.

Bridges. We can bridge this divide. I want to be a bridge.

I’m 200 pages in, and it feels like a guidebook to help me start the important work of being a bridge builder.

Paul saw the need for a bridge

Paul was a bridge builder in his letter to the Romans.

He knew there was a great divide in the Christ-followers of Rome at the time: Jewish Christians and Gentile Christians.

The term Jewish Christians refers to those of the bloodline of Abraham. They are followers of Christ who hold fast to the laws that Moses put forth in the Torah (eating Kosher, circumcision as necessary, etc.).

The term Gentile Christians refers to non-Jewish people (in this letter it refers to the Greeks) who believe in Jesus as their savior but do not uphold the ceremonial laws of Moses.

Paul saw unification between these two factions as one of the main purposes for writing his letter. If Jew and Gentile could come together in the name of Christ, the church would have an enormous platform in Rome to grow and thrive.

Paul reminds his readers— which, again, were a group divided by those who followed the laws of the Torah and those who didn’t— that it is not by law that Abraham became the father of all nations but by faith:

For the promise to Abraham and his offspring that he would be heir of the world did not come through the law but through the righteousness of faith. For if it is the adherents of the law who are to be the heirs, faith is null and promise is void.

Obedience to the Torah is not how we gain access to salvation, he asserts. We are rescued by God’s righteousness.

Paul reminds Jews and Gentiles of their common roots

Paul makes his case for salvation despite the law, but he also needs to address the issue of lineage from Abraham. If Gentiles didn’t descend from the holy bloodline, how could they be part of the family of Christ?

In anticipation of this objection, Paul explains justification by faith: believers, regardless of ancestry, are made part of a new family with Jesus as the head (Bible Project).

To help explain the idea of a new family in Christ, Paul uses the metaphor of an olive tree in chapter 11:

“… you [gentiles], although a wild olive shoot, were grafted in among the others and now share in the nourishing root of the olive tree”

Simply put, the Lord is the nourishing root, and the original branches are the lineage of Abraham. Paul refers to the Gentiles as branches grafted in, now firmly a part of the tree—of the family. So Jews and Gentiles are one family in Christ, and God will graft in anyone who follows Jesus.

John Piper, noted theologian, discusses the divide between Jew and Gentile this way:

“Neither Jews nor Gentiles have priority in how they are saved by faith in Christ… Ethnicity is not decisive for salvation.”

How does Paul suggest the two factions work towards unification?

Assuming his audience will accept his claims, Paul offers instructions on how to begin to bridge the gap between Jew and Gentile. Here are three of his main suggestions:

Paul argues that the practice of loving one’s neighbor as oneself will fulfill all of the different commandments:

Love does no wrong to a neighbor, therefore love is the fulfilling of the law

2. Do not judge one another

Paul asks his readers to withhold judgment of each other:

“Who are you to pass judgment on the servant of another? It is before his own master that he stands or falls […] Therefore let us not pass judgment on another any longer, but rather decide never to put a stumbling block or hindrance in the way of a brother”

3. Lift up your brother

He continues on, using language that reflects building one another up, because Paul knows when we lift our brothers, we rise, too:

“So then let us pursue what makes for peace and mutual upbuilding […] Let each of us please his neighbor for his good, to build him up.

Love your neighbor as yourself; withhold judgment; build each other up.

I think we Americans could heed this advice in our current situation.

How do we work towards racial unification?

As I mentioned earlier, Morrison’s book acts as a guidebook for Christians ready to enact true change in our race relations.

The book includes a series of steps that must be taken to bridge the racial division (in order, for effectiveness):

The steps aren’t easy. The conversations can be difficult. But the result of reconciliation is worth every bit of discomfort in the process.

Whether we use the metaphor of the olive tree with our Heavenly Father as the holy roots or that of the love of Christ as the bridge between a great divide, we know that we can achieve reconciliation when we set our eyes on Him.

Reconciling differences and repairing past hurts takes work. It is a holy work, a humbling work, a necessary work. If we do the work, we can achieve the unification that Paul hoped for the Romans:

May the God of endurance and encouragement grant you to live in such harmony with one another, in accord with Christ Jesus, that together you may with one voice glorify the God and father of our Lord. Jesus Christ

6 thoughts on “Thoughts on Romans: what would Paul say to a divided America?”