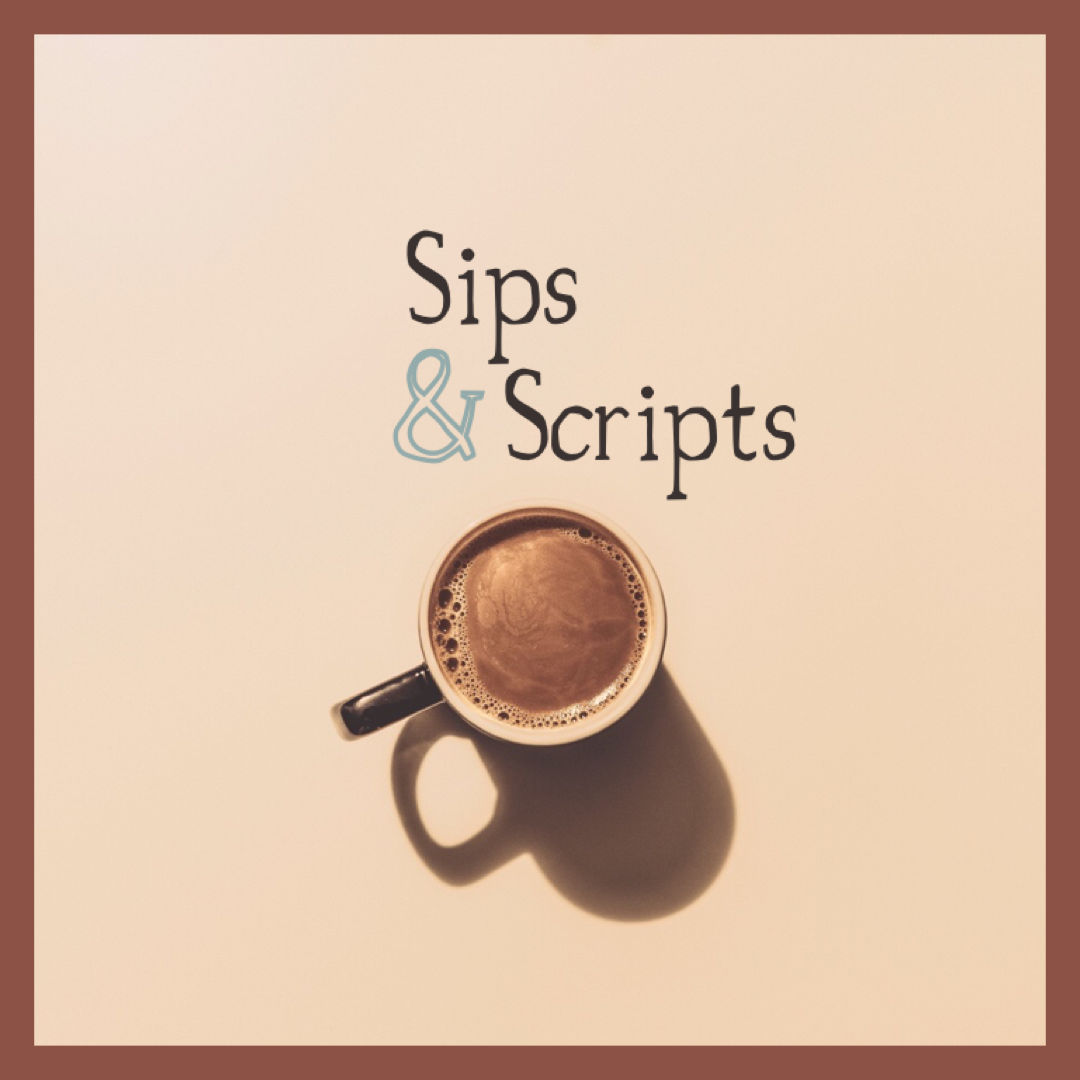 This is Giana.
(and baby girl due any day now!)

Her drink is an iced creme brûlée mocha (a Kuppa Joy, for locals). Also, how have I never tried one?

Gi and I brought our 3-year-old boys to the coffee shop with us,* so sprinkled into our incredibly deep discussion were tiny little voices breaking in to ask for snacks or to show us their coloring pages.

It was really funny to listen to this recording a second time, wondering how we moms can simultaneously entertain significant theological thoughts while also mitigating a toddler tantrum about muffins.

Though the conversation continued like this with approximately sixty little interjections, Giana’s incredibly inspiring testimony was not lost on me in the slightest.

The best way to recount our conversation is to begin with Gi’s story itself:

“When my daughter was two, we noticed that her left eye would protrude out after she was sick, which we thought was a little strange. We chalked it up to congestion and swelling, but even after the swelling would subside, we noticed the eye wasn’t really tracking anything.

We got into the eye doctor, and he noticed that the optic nerve was not very pink— pale, in fact. So he ordered an MRI.

The MRI revealed a tumor behind my daughter’s left eye.

Stanford took on her case at the research hospital three hours away.

In our initial visits, the experts were pretty certain it was cancer.

They also declared that she wasn’t seeing anything at all out of the left eye.

I’ll never forget it. In one sentence, they tell me my daughter is essentially blind in one eye due to a tumor, and in the next sentence, they ask me if I have insurance for all that is to come.

I could not hold back tears at that point. It was an overwhelming amount of information to process.

It was a trying season. We were flooded with scientific facts and percentages and probabilities. We had to hear and understand those things, but we had to let the Word ring louder and stronger.

We had to hear the facts, but we had to let the Word ring louder and stronger.

First, we know that the tumor was not sent to our daughter by God. In the Old Testament, tumors were one way sins were punished. But all of that changed with Jesus. We’ve been redeemed by Jesus’ sacrifice; he took all of those earthly punishments to the cross and died with them.

My husband and I leaned into a particular verse, and stood on it from there on out:

“Truly I say to you, whoever says to this mountain, ‘Be taken up and thrown into the sea’ and does not doubt in his heart, but believes what he said will come to pass, it will be done for him. Therefore I tell you, whatever you ask in prayer, believe that you have received it, and it will be yours”

The tumor and vision loss were the mountain. And so we needed to decide what specific prayers we would stand on, and then believe that they would come to pass.

When others wanted to join in to pray for our daughter, it was important that they know our specific prayers so that we could all stand together.

She performed an eight-hour-surgery that removed the tumor, cleaned out her sinuses to be certain of removal, and replaced the part of her skull that had been eroded from the tumor with a tissue that would help it reform.

The Holy Spirit did not lead us astray.

The one prayer that didn’t get an immediate “yes” from God was the prayer for the tumor to disappear completely. We initially prayed that God would just take it away. When He didn’t, my husband and I struggled with that one a bit. We asked for it, we believed it, but it didn’t happen as we thought it would.

But I reminded myself that I don’t get to be the decider of the miracle.

And yet, in different way, God did make her tumor disappear, it just wasn’t without medical intervention. Perhaps He chose to remove it in the way that He did to give me that season of growth, and to reward my faith.

It truly was a season of growth for my own prayer life and in our marriage as well. My husband and I have always had God at the center of our marriage, but we hadn’t had to endure a big test like this before.

On those long drives to Stanford, when our other children were back with the grandparents, and our sweet girl would fall asleep in her car seat, we were able to talk and pray and grow together through this trial. We would ask each other, “Do we trust God’s word like we say we do?”

In fact, banding together in faith when our daughter had this tumor has also served us in other trials that have come up since then. Recently, I felt God calling me to leave my full-time position to be home with the kids, and I stepped out in faith knowing that we would need to rely on Him for our finances. He has seen to our financial situation with every passing challenge.

I am not happy that our daughter had to go through this, and I don’t wish it on anyone. But I am glad that from this trial came a deepening of my faith especially in the face of powerful doubts.

The human mind is prone to doubt, especially if the enemy has his way. Along the way, I might have a doubt like, “she is never going to see out of that eye again,” and I let that doubt come through, but then I would meet it with the Word. I would let His words replace my doubt: “All of your children will be taught by the Lord, and great will be their peace (Isaiah 54.13) and “You will keep in perfect peace those whose minds are steadfast, because they trust in you” (Isaiah 26.3)

So if the doubt comes through again, I visit the Word again, even if I have to do it 50…a billion times. The doubt can cross through, but it I can’t choose to grab it and stand on it. I stand on His word.

The doubt can cross through, but it I can’t choose to grab it and stand on it. I stand on His word.

And now sharing this story, I hope it helps someone who may go through something similar one day.

And for those who do have to face something as challenging as this, remember that the enemy is likely to come for people who have a desire to share about God. What does the enemy gain by attacking the spiritually dry?

And it’s through such adversities that we get a chance to prove our trust in God, and He will reward our faith.”

I left the coffee shop feeling like I had been given the gift of wisdom through Gi’s recounting of her trial. Though her situation is unique in that we all don’t have a child with a tumor, we all suffer through adversity and have to stand up to forceful doubts. I felt attacked by the enemy last year, and Gi’s reminder shows me that it may have come from my new conviction to write about a God and Jesus publicly — why would the enemy want that?

Giana is steadfast in her faith, and God will continue to bless her for it and redeem her family’s trials.

I am so grateful that God helped us find each other on that warm fall evening at soccer practice. We started chatting lawnchair to blanket, about potty training, about my desire to start this blog, about her recent trip to Stanford.

And the end of the night felt like something out of a comedy movie— we were exchanging social media accounts, and she was halfway through spelling @giitsme when the sprinklers came on unexpectedly throwing our children into a tizzy and soaking our lawnchairs—our purses—everything. Puts such a smile on my face to think about two moms coming together in such an imperfect way.

When you finish reading this, would you offer up a prayer of gratitude and praise for the healing of Gi’s daughter? And for Giana’s patience and strength as she sits in the final days of her pregnancy. Let us pray prayers of safety of delivery for mom and baby and endurance for the whole family during the newborn days.

2 thoughts on “Sips & Scripts: standing on the Word of God even in the scariest of times”

::cringe::
the Ann tee
the Daniella tee
No Valentine this year?
🥚🥚🥚
It’s been a big year for His Wear!